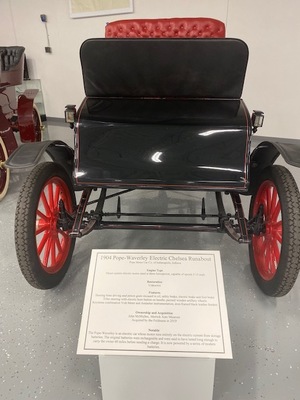 The 1904 Pope-Waverely is an electric car. It runs on direct electric current generated by batteries in a series. Early electric cars were quick to start and very efficient, but they required a charge too often, limiting how far their drivers could take them. Thomas Edison owned a Pope-Waverley. He tried to make electric car batteries better, but his battery was still heavy and expensive. Electric cars were marketed heavily to women and professionals, who could rely on them to start with ease and zip about readily. The Pope-Waverley could travel at speeds up to 15 miles per hour. Pope-Waverley literature reports that owners claimed to have traveled upwards of sixty miles on a single charge, though it is unknown if they in fact did.