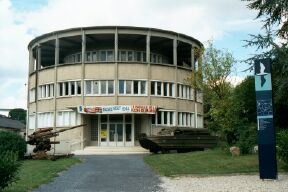 The valley between Coudehard and Montormel marks the spot where the Allies finally won the Battle of Normandy; this is the area where the Battle of the Falaise Pocket raged between 18th-22nd August 1944, with 12,000 soldiers killed and heavy casualties among fleeing refugees, as the German forces attempted to retreat towards Paris. The route from Caen to this spot was named the "Corridor of Death" at the time and the area was infested with flies for months afterwards. The 1st Polish Armoured Division succeeded in holding this strategic position despite suffering heavy casualties and repeated assaults by superior German forces.

The hilltop memorial and museum, with armoured vehicles and exhibits describing the battle, is built into the hillside on the spot occupied by the Polish armour and looks down over the valley where the fighting took place.