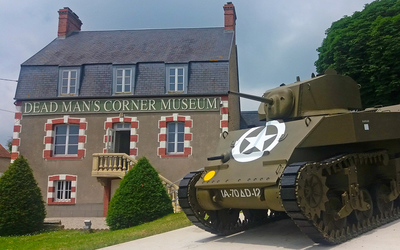 Near the neighbouring village of Ste Côme du Mont is the place known as Dead Man's Corner, now a superb little museum with an excellent memorabilia shop. This spot was named after an American soldier whose tank was disabled by German guns on the corner where the house stands, which was a German command post on the important road from the coast to Carentan. The soldier's dead body remained hanging from the turret until the Americans finally overran the command post - hence the name of the site. The house contains a lot of personal effects donated by American soldiers who landed at Utah Beach and their families.