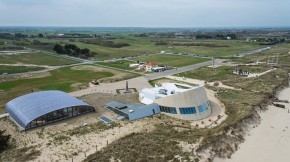 From Point du Hoc if you venture further along the coast past Isigny and Carentan you arrive at the Utah Beach Museum at Sainte-Marie-du-Mont. The Utah Beach museum tells the story of the American landings and fighting to control this sector. The displays include actual landing craft used by American troops during the Normandy landings.