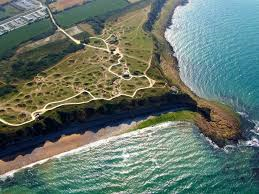 From the American Cemetery continue along the coast to Point du Hoc - site of a daring raid by American Rangers who scaled the cliffs to attack a strategic German gun battery. You can see where the guns were and massive crater holes caused by the advance Allied bombardment - you also get panoramic views of the coast in both directions, this dominant position explaining why it was important that this battery was taken out early in the day.

Nearby at Grandcamp there is a small museum on the seafront road dedicated to the Rangers who took and held Point du Hoc.