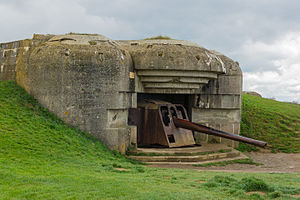 West of Arromanches is the German gun battery at Longues-sur-Mer, part of the Atlantic Wall defences. A major defensive position in the Atlantic Wall, this battery had a command post and four bunkers, each with a 150-mm gun permanently in place. Located in the middle of the assault sector and on top of a cliff overlooking the Channel, it played a strategic part in the Allied Landings of June 6th, 1944. Longues Battery is the only one in the region to have kept its guns; because of its excellent state of preservation it is well worth a visit.