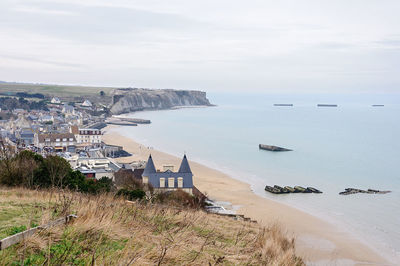 At Arromanches, on top of the cliff before you descend into the town itself, is the 360 degree cinema - there you can watch a film "in the round" which cleverly mixes archive and modern footage.

If you park at the cinema, a short walk down a cliffside path brings you to the Landing Museum built near the site of the Mulberry Harbours, which were constructed to aid the Allies in getting supplies ashore. NB There is a charge for parking at both the cinema and the Arromanches museum - park at one and walk to the other if you plan to visit both.

The Arromanches Harbour Museum has excellent exhibits, films and models to illustrate the D-Day landings and the extraordinary creation of the floating Mulberry harbour.