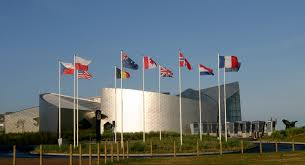 At Bernières-sur-Mer is the Canadian Memorial and museum dedicated to the Canadian forces who took Juno beach; one of two major Canadian war grave cemeteries is located nearby at Reviers, near Bény-sur-Mer, with a total of 2048 burials. There is an even larger Canadian war grave cemetery inland on the road from Caen to Alençon at Cintheaux, near Bretteville-sur-Laize; almost every unit of the 2nd Corps is represented here. There are 2,793 Canadian soldiers buried in the cemetery at Cintheaux, 91 of them unknown. With them lie 79 members of the R.C.A.F.