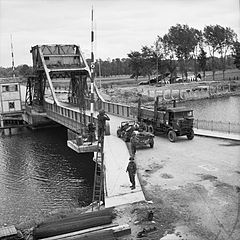 The capture of the River Orne bridge at Ranville and the bridge across the Caen Canal at Bénouville is the most famous mission of the airborne division. 180 troops of the Ox and Bucks Light Infantry, commanded by Major John Howard, captured the bridges after landing in Horsa gliders only metres from their objectives.

In less than ten minutes both bridges had been captured intact. The sea borne reinforcements commanded by Brigadier Lord Lovat, preceded by his bagpiper Bill Millin, were able to cross the waterways to reinforce 6th Airborne Division on the eastern flank. Among these Green Berets, 177 French Commandos commanded by Philip Kieffer.

On June 26th 1944, the Caen Canal bridge was baptised Pegasus Bridge as a tribute to the British troops. Pegasus, the winged horse, was the emblem worn on the sleeves of the men of the airborne division. The insignia was chosen by the author Daphne du Maurier, wife of the wartime commander of British airborne forces General Sir Frederick Browning

In 1961 the bridge acquired celebrity status due to the D-Day film, produced by Darryl Zanuck, The Longest Day.

Replaced in 1994 by a new bridge the original Pegasus Bridge is now on display in the park of the museum.