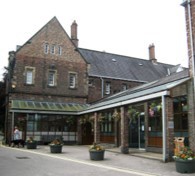 In 1846, what is now the Holgate Building, was opened as the Yeoman School, for the sons of farmers and tradesmen. In 1857, it became the Free School of Robert Holgate, and later became Archbishop Holgate’s Grammar School. The building was taken over by the College in 1963, in exchange for land on Hull Road, where Archbishop Holgate's secondary school still stands. Major redevelopment was carried out in 2005 to create the modern building you see today.

Congratulations! You have completed the Heritage Trail. Why not head to the  Dining Hall, for a well-earned tea or coffee?