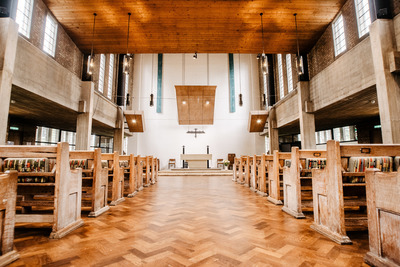 The chapel was designed in the Brutalist style, by architect George Pace, and was designated a “Listed Building” in 2004. Plaques, on either side of the double entrance doors, bear the names of former students who lost their lives in World Wars One and Two.

The Joseph Lightfoot Talbot chair is on the right of the altar. It is named after the first speaker of the Junior Common Room, and was used by the Student President when chairing meetings. The chair was crafted by Robert “The Mouseman” Thompson. Can you spot the carved mouse?

The south transept (on the right) is dedicated as The Water of Life Chapel. It contains a stained-glass window, designed and made by former student, Cathy Nutkins, working alongside glaziers at York Minster.

To the left of the altar is the St Margaret of Dunfermline Chapel – in honour of  Ripon College’s adopted saint. The mosaics in this chapel came from the 1899 Ripon Chapel. The Willis Organ is also from Ripon, and housed in the loft at the rear of the chapel.

We will now leave the chapel to look at the Bell Tower, on the lawn outside the main entrance.