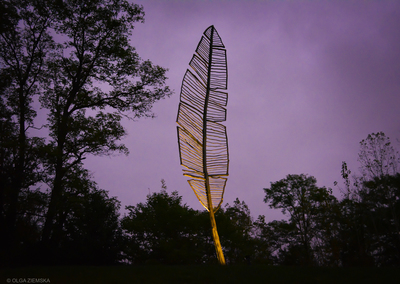 “My name is Olga Ziemsa; I’m from Cleveland, Ohio and my sculpture is called Feather Point. I am Polish American, so I am the first person in my family born in America. My parents immigrated to the United States in the ‘70s with my brother. So – Thaddeus Kosciuszko; when I heard that specifically the park was the land that he was gifted by the government for all of his contributions to the Revolutionary War and, I guess, his good friendship with Thomas Jefferson, I was just very excited by that and also by learning the Native American history of the Wyandot Indians. So that was immediately something that I felt such a close connection to Kosciuszko because I grew up listening to my father telling me stories. He was very famous so he played a big role also in Poland, our history too, so … Bill Moose was somebody that emerged from the stories that I was hearing about the area and I did a lot of extensive research and it took me everywhere, but I had a photo of Kosciuszko on my studio wall and a photo of Bill Moose next to him and finally what started emerging, I just started noticing, ‘Oh, they both have feathers; one has feathers in his cap and the other one has a feather headdress, so it was sort of a ‘Eureka’ moment. So I just delved into the symbolism of the feather itself and how universal that is and how that crosses all cultures and really informed who those individuals were. Who Thaddeus Kosciuszko was, who Bill Moose was; both of them were very much humanitarians and believed in the equality of people. Both had a love for country, so I also think there’s sort of a connection to ground and soil and earth.”