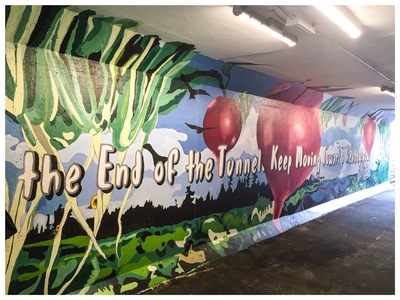 “I’m David Royer. I serve as the Chief Executive Officer of the Alcohol, Drug and Mental Health Board of Franklin County, better known as ADAMH. Dublin has a strong tradition and a strong commitment to public art; in fact, it’s one of our leading communities in central Ohio. So we saw this as a natural extension of the public arts movement in Dublin. Dublin also is able to have a strong arts council, which is an integral part of the fabric of the community. So we saw Dublin as a natural partnership; one is because of their love of art in general, but also because of the arts council in Dublin. In some ways, there are these perceptions about Dublin as a community which can be true, but they’re not entirely true, and that is that Dublin is very much more of a diverse community than one would think, not only in terms of ethnicity and race, but also in terms of economic status. That’s also true in many ways of people with mental illness and addiction. We sometimes have what we would consider stereotypical perspectives or perceptions about people with mental illness and addictions. And in fact, the reality is that these illnesses touch every person regardless of their economic status, their political affiliation, their race, their gender. And so in some ways, it’s also about busting up the stigma and the stereotypes whether it’s about who does live in Dublin or whether it’s about the nature of mental illness and addiction. We really couldn’t have had nearly the success and the creative success of the mural had it not been for students at Bailey Elementary and the art teachers and Dublin City Schools; without them what you literally see on the sides and on the ceilings of the murals would not be there and so a lot of the success of the endeavor really goes to those young people that took a moment to think about what is health and why does health matter. That’s part of the collaborative experience that ALTernative uses that allows us to have community ownership, community acceptance and, I would argue, just a very positive community experience. It’s also important to recognize that I don’t think we could have had as nearly successful venture into this community had it not been for the outstanding commitment of the City of Dublin and the Dublin Arts Council.”

To learn more about the Dublin Tunnel Mural, visit dublinarts.org/publicart.