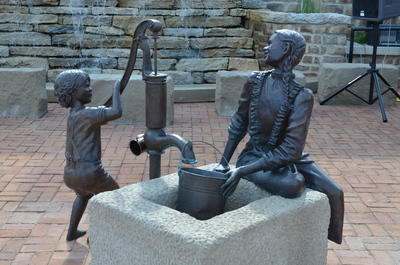 “Hi, my name is Mike Tizzano and I’m a sculptor from Westerville, Ohio. I work primarily in bronze and I also work in ceramic. In the middle of the intersection of Rich Street and High Street, especially in historic photos that I saw when there were dirt roads right in the middle of that intersection, was the original town pump. And it had a trough that looks like it could accommodate two horses. It was a limestone trough, and there are a number of photos – they weren’t really very clear photos – for me to use in creating the piece. I got a general idea of the architecture in the surrounding area and what was happening at that time. It was my understanding that as the area developed and they paved the roads and traffic increased, it was necessary for them to move the pump off to the side, which was in the sidewalk area for some period of time. When I first saw it, it was just a pipe sticking up out of the ground with a cap on it, and no one really knew what had ever happened to the original pump. But that town pump was a gathering place for the community. At the time it was a farming community, and like we have in offices today with a water cooler, where people would gather around and stand and talk and gossip. This was a site that a lot of the local people used. There was also a cup that was hanging on a hook on the pump shaft, and it was a drinking cup that was used by the community. So this pump will also have the cup – but I’m going to be putting it on there permanently so people don’t walk off with it. They probably won’t want to drink out of it, either, but the idea was to recreate this sense of community so that we now have in a place very close to the original site a recreation of the town pump.”