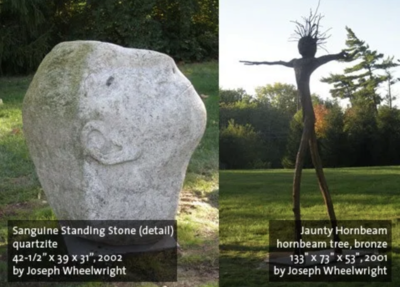 “I’m Joe Wheelwright and I work in Boston, Massachusetts, and in Vermont, in a little village called East Corinth. I used to live in a commune in the early ’70s; that’s how I got started, and that was in Vermont. We were able to acquire a little piece of land up there, and in the early days I began collecting things I found on walks; little insect bones, or cocoons, or snails, and twigs and flowers – all kinds of little things – and they would turn up in my artworks which, in those days, were dioramas. But as the years have gone by, I’ve concentrated more on the trees and on stones. I’m inspired by nature; I see the art in nature quite often, and I also see us. Stones are very much like our heads. They’re stubborn; they seem to have a great capacity for thinking. They’re often quite patient. They can get violent and so on, whereas trees are like our bodies; they’re very energized and athletic. Their arms are flailing and their roots are seeking things underground and the branches are reaching for the sun, so they are more like our bodies.”