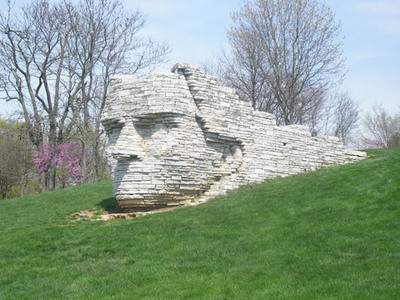 “Hello, my name is Ralph Helmick. I’m a sculptor concentrating in public art, and I work in Newton, Massachusetts, which is just outside of Boston. I got started in public art almost 30 years ago. I completed my first piece in 1983, and Leatherlips for Dublin, Ohio was something I created with local collaborators in 1990. Scioto Park was an exceptionally promising setting particularly because of its idiosyncrasies with respect to siting the sculpture, that is, it’s a big long slope, the base of which is the Scioto River. So automatically it invited a different kind of formal solution than a sculpture in a most parks, which would be a little ground plane. What struck me about Scioto Park, and Dublin in general, was history. Dublin’s not terribly dissimilar from the suburb I grew up in, in upstate New York. Every place has their own special character, but I think a lot of post-World War II suburbs are people living comfortably, but I also think there tends to be a hunger for deeper roots or a more nuanced understanding of the land on which they live because suburban developments like the one I grew up in, and it can have a sameness. I think that’s only accelerated in the 20-plus years since Leatherlips went in. So, I think what was admirable about Dublin is that they were looking to not just make a public art collection or just distinguish themselves culturally, but I think there was this, at least I intuited, there was a sense of hunger for something deeper. And so that was part of what provoked the research into local history and, most notably, Shateyoranyah, better known as Leatherlips.”