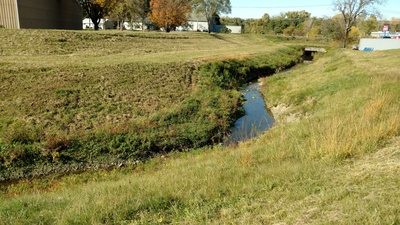 If you look to the side of the park, you will see a steep, grassy incline. Atop this, an equally steep drop-off can be found on the other side, filled with a stream parallel to the Rail Trail. This is Willow Run Creek, a passage of water that runs through town several miles south, merging into the Susquehanna River. Much like Twin Orchard, you will find many institutions in the area named after Willow Run for its subtle importance to our life here.

Arguably more important is the hill looming above, which is a part of Vestal’s Stormwater Management System. Since this general area is part of a floodplain, heavy storms are a constant threat to the people living here. The Flood of 2011 is a prime example of how catastrophic these can be, as the area took years to recover from its ravages. In that instance, the entire area beyond Twin Orchards Park and even the nearby Town Square Mall were submerged in rainwater, resulting in many buildings being condemned in the aftermath. This incident was caused by a hurricane, named Irene by meteorologists, that grazed the Eastern Seaboard, inflicting $13.5 billion in damages on the nation. If not for barriers like those found at Willow Run, the destruction done to Broome County would have been unimaginable. When standing upon barriers like these throughout Vestal, think of them as guards against nature’s wrath.

Hellbender Salamander – A unique denizen of the stream here is the Hellbender Salamander, a giant amphibian you would not expect to find in a settled village like Vestal. Topping out at a length of two feet long, the Hellbender vastly exceeds the size of all other amphibians in its habitats. The species is in fact the last surviving member of its particular genus of salamanders, which first appears in the geological record around 65 million years ago. This means that these creatures have existed since the end of the dinosaur era, surviving a mass-extinction event along the way. These amphibians are uniquely adapted to live in oxygen-rich environments with running water, since their skin absorbs oxygen as water flows over it. This means that they will not be found in the wetlands earlier, because the still water will not provide them with their necessary nourishment, but the Susquehanna river and its immediate outcrops suit them perfectly.

Monarch Butterfly: Another creature that appears throughout the Rail Trail, but seems to be found more commonly in the Twin Orchards Park area is the Monarch Butterfly. While this species of butterfly is fairly large, typically with a wingspan of 3 1/2 to 4 inches, the commonly believed notion that it was named “monarch” for its impressive proportions is incorrect. In fact, it was their striking orange color that conferred this name to them, with settlers in the 1690s making a connection between this hue and the then sitting King of England, William of Orange. You can spot Monarch Butterflies most easily as they flutter about near greenery. However, there are other ways to find them in which you might not recognize them. As metamorphizing creatures, Monarchs experience dramatic physical transformations throughout their lives, starting as miniscule eggs before hatching into caterpillars and molting into the butterfly forms they are better known by. If you search on tree branches, you might see them in their caterpillar form, or discover them frozen in the process of becoming a butterfly.