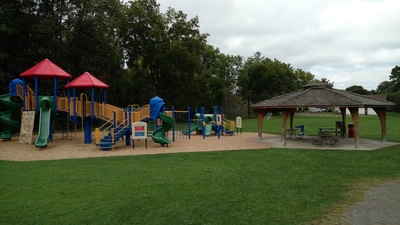 Twin Orchards Park, one of the last major attractions of the Rail Trail, will be easily spotted as you move along. Many places in this part of town are named with the moniker “Twin Orchard,” as well as the general area itself, probably deriving from the apple farms that sprang up in the region after European settlement. The Vestal municipal website states that this park is notable as one of the first to be built for the town, highlighting again how central the Rail Trail area has been since our founding.

Despite the apparent antiquity, Twin Orchards Park’s facilities are relatively new and well maintained. The playground here is very colorful and of high quality, possessing several slides of different types, as well as a smaller fixture for especially young children. Older children can take advantage of the nearby soccer field or take their bikes down the trail. For parents, the large gazebo is mere feet away, where they can sit down and watch their kids in the comfort of shade. Improvements are regularly made to the park, with the bench just off the Rail Trail given a nice concrete platform and a stainless-steel bike stand being installed in the last several years. Truly, there is something to be found for everyone at Twin Orchards Park.