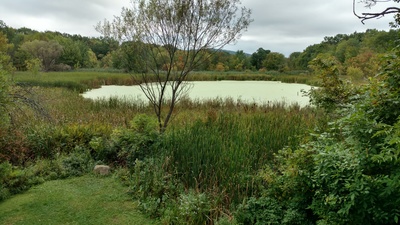 Here at the halfway point in the Rail Trail, you will come across a point with signboards that leads into the forested area. Take this path to see the preserved wetland area tucked between the trail and residential areas beyond. Several attractions are here to find, including an elevated platform where you can rest and get a good view of the preserve in all its glory.

Wetland is a broad definition that denotes any type of land area that is fully saturated by water for long enough periods to support aquatic plant life. Technically, the environment here is a swamp, due to the fact that it exists in a largely wooded area. Because wetlands combine factors of both land and aquatic environments, they can support a wider variety of lifeforms, and are therefore considered one of the most biologically diverse habitats on the planet. Depending on the day and time of year, you may see ducks, deer, river fish and many other types of plants and animals here, making this one of the most interesting places in the area.

Swamps such as this are commonly found along rivers, and with the confluence of the Susquehanna and Chenango Rivers only miles ahead, it is no surprise one would form here. In fact, several other wetlands can be found in the area, such as Black Ash Swamp to the south and Binghamton University’s Harpur Pond preserve. Prior to colonial expansion into the area, these swamps were far larger, seeing the Native population subsist on the bountiful supply of fish and eels found here. Contributors to the shrinking of the wetlands have been the reservation of agricultural land, building the railroad right through the habitat and work on an abandoned canal project in the late-19th century. Despite these pressures, the wetlands here persist, and have come under the protection of various organizations and laws to conserve them for the future.

Eastern Firefly – During summertime, you can find a unique creature in this area off the Rail Trail. Fireflies float about at night, giving off a green light to observe. Despite their name and appearance, fireflies are actually beetles. Those found here are alternatively called Common Eastern Fireflies or Big Dipper Fireflies. Their bioluminescence is created by chemical reactions within organs specifically developed to give off light, allowing them to search for prey and mates alike. Typically, they are only active during warmer months, after which they hibernate with their eggs and larvae either underground or in tree bark. Fireflies are a characteristic animal of wetlands, again highlighting the habitat’s unique nature with their rare features.

Gray Treefrog – Found throughout much of Eastern North America, the Gray Treefrog is a major facet of wetland environments such as this. While it has been given the moniker “gray,” they are actually well known for changing to a wide variety of colors depending on where they rest. This ability to camouflage themselves has contributed significantly to their success as a species, avoiding predators in their midst. Arguably more significant, however, is their incredible ability to thrive in harsh environments. Gray Treefrogs have been shown to successfully breed and hatch in bodies of water as transient as small puddles, simply moving to new environments as they dry up. Additionally, they are able to endure harsh winters, surviving after being frozen for long periods of time. Because of their small size and camouflage, you would probably have difficulty locating these frogs, but will definitely hear their croaking if you come here on summer nights.