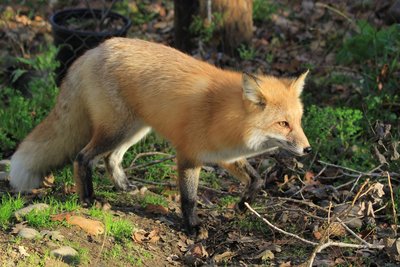 Spotlight: Mammals of the Rail Trail

The class of biology that human beings fall within, mammals are distinguished by our warm blood and vertically moving spinal columns. We are now among the most successful varieties of creature in the animal kingdom, but it was not always so. Mammals were preceded by reptiles, whom we appear to have transitioned from around 280 million years ago. It was only after the extinction of the dinosaurs that mammals were able to move into new ecological niches and become as successful as we are today. Here are some notable mammals to be found on the Rail Trail.

Whitetail Deer – Emblematic of North America as a whole, the Whitetail Deer is an obvious first mammal to spotlight. These are among the most common wild animals on the continent, found throughout the vast majority of the United States, Canada and Mexico. One reason that deer have become so extant is the conversion of most of this area in recent centuries to agricultural land, which has made some of their favorite foods more common. Another reason is that settled land has driven away or cordoned off many of their natural predators, such as wolves, who do not like their territory overlapping with human beings. Here in Broome County, the Whitetail Deer has become severely overpopulated, exploiting their food sources to the point that many starve to death, and other important fixtures of the environment are forced into decline as well. Some solutions have been proposed, such as importing predators back into the area, or having hunters perform a mass-culling on the species. On the Rail Trail, you are more likely to find footsteps or droppings than an actual Whitetail Deer, as they like to make themselves elusive.

Groundhog – One mammal that might be in your presence right now without you even knowing is the Groundhog. These small rodents burrow underground, where they create tunnels to live, so they could be beneath your feet as you listen to this recording. Within these burrows, Groundhogs will keep their young safe from predators, store large amounts of food and hibernate for the winter. Also known commonly as “Woodchucks,” this name is misattributed to them chucking wood, a habit they do not even have, and in fact derives from their Algonquin name wuchak. You might be familiar with the annual February ritual of Groundhog Day in Pennsylvania, wherein people wait to see a hog named Punxsutawney Phil emerge from his burrow. If Phil sees his shadow and returns to the hole, it indicates there will be six more weeks of winter, but spring will arrive early if he remains outside. This is not entirely superstitious, since groundhogs only start emerging from their burrows when the weather gets warmer, so you can take seeing them as a good sign of warmer days to come.

Red Fox – Although foxes have a generally elusive nature, in truth they are some of the most populous, widespread mammals on Earth. They can be found on every continent except for Antarctica, thriving in harsh and temperate climates alike. While we humans have an affinity for the creatures, finding their fur and canine features endearing, this extreme success in the animal kingdom has come at the cost of environmental stability. Various conservation groups have identified foxes as one of the most destructive invasive species, moving into habitats and quickly decimating the populations of less capable animals. Those found on the Rail Trail are of the Red Fox variety, distinguished by their luscious red coats of fur, and are commonly found throughout most of the Northern Hemisphere. There is a chance you might see a Red Fox day or night, but if you do it will likely only be for mere seconds as it passes between trees.

Brown Bat – A final mammal worth spotlighting is one that takes a form more akin to birds: the bat. More specifically, the Brown Bat, which is commonly found in Broome County. Bobbing through the air with leathery wings, bats are the only mammals in the world capable of authentic, sustained flight. It is unknown why they are the only mammals who developed flight, especially since the adaptation was successful enough to spread their kind across almost every landmass on Earth. One of the smaller varieties of bat, the Brown Bats here are very difficult to spot even right in front of your eyes, curling up into inconspicuous lumps of fur in corners. As nocturnal animals, you will only find them active at night, typically on the edges of wooded areas or the wetlands where they hunt for insects. While there is no guarantee you will see a Brown Bat during your time on the Rail Trail, they have become exceedingly common in homes throughout the area, so there might be one waiting in yours when you return.