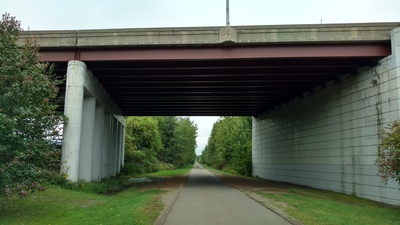 Moving along, you are bound to notice a large bridge overhead. This intrusion of modern civilization is an overpass of Route 26, a highway that runs the length of the state from north to south. One can take this roadway all the way to the St. Lawrence River on the border of Canada in mere hours, or down to Pennsylvania and beyond easily.

Overlapping this former railway, Route 26 is a reminder of how rapidly our civilization has developed over the last century, with one form of transportation supplanting the other. It was not long ago that this area was still rural, with much of the developed land still covered in wetlands and forest. If you look at any of the pictures of the previously discussed Lackawanna Train Wreck, you can see just how open the landscape was back then in the background.

One is forced to wonder what this place will look like in another century. Will the nature here be further enclosed by metal and concrete structures, like this bridge that looms overhead today? Or perhaps civilization will change in ways which dominate the environment less, with nature reclaiming some of the area, seeing moss and vines overtake the structure? Either way, the solid concrete that exists will remain for many ages to come, sharing in the destiny of the environment around it.