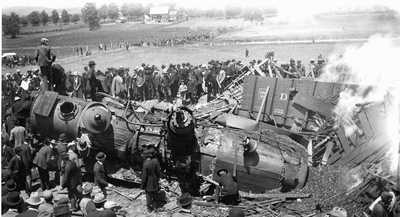 One of the most momentous events to occur in the history of the Southern Tier happened right here, early in our exploration of the Rail Trail. On June 8th 1901, two trains collided in a disaster known as the Lackawanna Train Wreck. One of these trains, returning from Scranton to take on more cars for transport, was at rest, filling up on water. Meanwhile, the other was going at high speeds, precariously hauling multiple tons of dynamite on board. A lack of precaution put these two trains on a collision course that fateful day, causing a disaster that is still remembered over a century later.

In the event, both train’s conductors spotted each other in the distance before impact, blaring their horns to alarm those in the vicinity. As they sounded out, the train carrying dynamite sped on, skidding loudly on its breaks. But it would prove too fast to stop in time. An earthshaking explosion occurred at the moment of impact, the volatile dynamite cargo exploding instantly, sending wood and metal debris flying and windows shattering for miles from the sound. At the site of the disaster, coal from the wreckage burned as people responded to the catastrophe. It is said that thousands of spectators came to view the scene that day, and rescue workers were kept busy well into the night.

Five people were fatally injured in the collision, including one conductor and brakeman. Another seven were maimed, with the local paper recording injuries such as lost hands. Property damage from the event was immense, costing hundreds of thousands of dollars, which amounts to at least three million in today’s money. Engineers from both trains were later held criminally negligent for the disaster, with one even off getting tea as the collision occurred. As you continue along the trail, you will see a historical placard where the wreckage once existed, memorializing our enduring memory of the event.