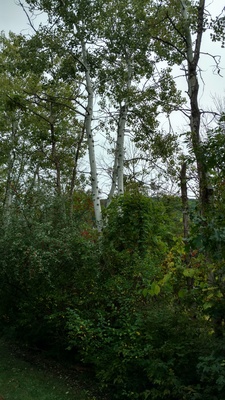 Moving forward on the trail, the earliest area of the tour consists of a drainage pond on your right. This is an outgrowth of the area’s wetlands, which the local government uses to supplement its stormwater management system. We will address the wetland areas more later. For now, let us focus on the trees, which will be a primary characteristic of the nature found here on the Rail Trail.

We are now moving into forestry. Nearly a third of the land on Earth fits into our general definition of a forest, which is any large area primarily covered by trees. Forests are even more common here in New York than most regions of the world, with about 60% of the state’s land covered in them. Biologists classify forestland by the climate they exist in, as well as the main trees that grow there. Because all four seasons are distinct here, forcing the trees to react to changing weather by shedding their leaves, our forests fall into the deciduous category. And by having primarily oak/hickory trees, our forestland can be classified as “Deciduous Oak-Hickory Forests.”

Still, this is a general designation, as you can find a great many types of trees in New York forestry. This is owed to a process of rapid decline and recovery in the last several hundred years. During the 1800s, United States industry drew heavily off of our forests, with trees being cut down in great numbers to serve as fuel sources and cleared to reserve new agricultural land. This deforestation was responded to a century later with significant efforts to restore the state’s forests. While some areas were allowed to regenerate naturally, growing only native plant species, many were repopulated by importing trees from a wide variety of places. Thus, the biodiversity of much of New York’s forests is far greater than average. In Broome County alone, you can find tree species native to lands as varied as Scandinavia and Japan.

Wood Turtle – A rare sight, this part of the Rail Trail will sometimes feature turtles traveling along the path in the same direction as visitors. The variety you are most likely to come across are Wood Turtles, so named for their appearance in forests. However, as is expected of the species, they only dwell in places saturated with water, never venturing beyond 500 yards from the nearest stream. Nonetheless, this species is known for traveling around 100 meters a day, which is well above-average for turtles, hence their occasional appearance here. One unique behavior that Wood Turtles exhibit is their way of catching worms, honing in on them and rhythmically stomping on the ground to force them above the surface. If you are lucky enough to come across a Wood Turtle, please be careful not to disturb the creature, since their population is in decline.

Dragonfly – One of the most interesting insects that live in the area are dragonflies. Known for their characteristically giant eyes, large, transparent wings, and elongated body, you can sometimes find them buzzing through the air on hot days. Since they are considerably larger than most insects here and have a uniquely stable way of flying around, they are often easy to spot when present. Dragonflies are impressive predators, devouring other insect species mid-flight and even some small varieties of fish in bodies of water. Territorial, they compete with others of their kind to maintain domains where they hunt and breed. Dragonflies have been around for hundreds of millions of years, with even larger ancestors first appearing in the geological record during the Paleozoic Era. Their association with dragons is a bit of a mystery, with some more prominent theories pointing to the Christian story of St. George, whose horse was turned into an insect after he slew a dragon.