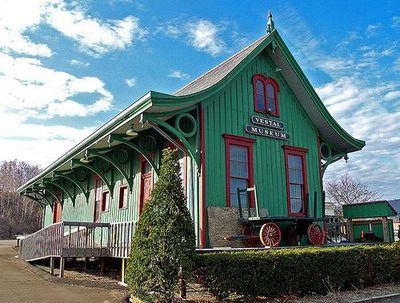 Much like the Coal House, our building, the Vestal Museum, was converted from old railroad assets. Its original structure dates back to 1881, when it served as a depot for the Delaware, Lackawanna and Western Railroad, storing and servicing trains while they were not in use. The building went on to serve in that capacity for about eighty years, participating in the railroad’s golden years. Thereafter, it was used as a warehouse during the industry’s steep decline in the 1960s. The Town of Vestal saw its cultural significance to the area, however, and took the opportunity to purchase the structure for a mere $201 in 1972, bringing its time as a part of the railroad to an end.

Repurposing the building into the museum it is today was a long, involved process which took several years. This began with its relocation to the Vestal Library’s packing lot, where it would remain for many decades to come. Here the building had all of its dysfunctional elements replaced, such as wood rotting from nearly a century of use and its weathered slate roof. More significant were the new additions that allowed it to serve as a public space and museum. A bathroom, which was a luxury that railway workers were denied, was installed, as well as a deck for gatherings and basement for the storage of artifacts. These renovations were completed in 1976, ushering in the building’s new role as one of the most important fixtures of Vestal’s communal life.

As a department of the town, the museum operates through the efforts of a handful of employees and some volunteers. The Vestal Historical Society holds their collection at the Vestal Museum. We hold monthly openings for new exhibits and special events. Furthermore, anyone who needs to hold an independent meeting is welcome to request the building’s use. The Vestal Museum serves at the pleasure of the public and is available for your convenience.