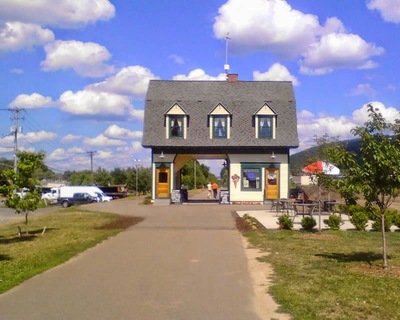 Among the first and greatest attractions here on the Rail Trail is the Coal House. Built in 1908, this building was once used to refuel trains while the railway was still operating. The large opening in the building was where trains passed through, being weighed before and after taking on coal by the wooden apparatus in its center. After being decommissioned in 2002, the Coal House was relocated here in 2006 to serve as a public gathering place.

Today the Coal House serves as a café, which hosts many of the events conducted here. There is an emphasis placed on healthy food and beverages at the café, in keeping with the public wellness the trail promotes. One of the ways that the Rail Trail serves the community best is through the marathons and run/walks regularly held, which typically begin not far from the building. Additionally, a plethora of other public events are regularly held at the Coal House, making it more than live up to its new role as the premier social hub of the Rail Trail.