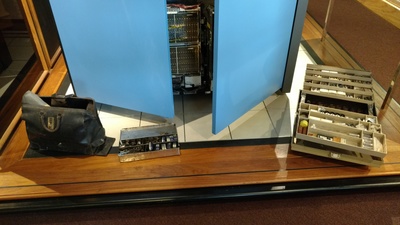 The extreme success IBM enjoyed after its creation of the Model 360 would define a golden age of profitability, but this did not last forever. The company would face difficulties in the next few decades as other companies emerged to stake their claim to information technology. A prime example of this was Intel ushering in the Fourth Generation of Computers in 1971, with its introduction of the commercial microprocessor, further miniaturizing machines by fitting every component of a CPU onto small chips. IBM had difficulty creating microprocessors of their own, with their first chip, the Model 808, never achieving success. Despite such difficulties, the company would continue to make its own landmark contributions. Principally, IBM once again revolutionized computers as a product in 1981 with its release of the world’s first model designed for home use. So, you have IBM to thank for all the PCs you have used throughout your life. While once IBM controlled over 70% of the market in its field, the company now exists in an industry of fierce competition, with itself and rivals always looking for the next innovation to stay on top. Nonetheless, IBM remains one of the most dominant, influential corporations in the world today.

To conclude, however, it is perhaps more important to discuss IBM’s relationship with Endicott, rather than the company itself. A story from Ted Warner, one of the museum’s top representatives, can perfectly sum this up. If you look at the floor of the final platform of the museum, you will see a large beige box and leather bag. Some years ago, a person came in to donate the box, which Ted recognized as the toolkit of one of IBM’s Customer Engineers. These were workers who were sent by the company to repair their customer’s machines on site. Because IBM wanted its products and buyer’s reputations kept sterling, these mechanics would perform their work very discretely, coming in out of sight through backdoors. Since Customer Engineers’ repairs went unnoticed, it seemed that there were never any problems with the product or their user’s operation. The beige tacklebox was a very much intact, well supplied example of the toolkits used by these employees, which was impressive enough. But what impressed Ted more was what happened next. As he processed the valuable new donation, another former employee came in to donate that leather bag. This was immediately recognized as another Customer Engineer toolbox. Two former employees who served IBM in the same job donated the same type of artifact at the same time. This illustrates just how impactful IBM is to the people of Endicott, and why the company is honored with the whole first floor of our museum.

This concludes our tour of the first floor. We hope you enjoyed this journey through the history of IBM, and information technology as a whole. If you have leftover questions, comments or want to clear up some details, please feel free to speak with our museum staff. There is much more for you to discover upstairs, as well. Please continue on, or return sometime, to experience the local history exhibits on the second floor. Have a nice day.