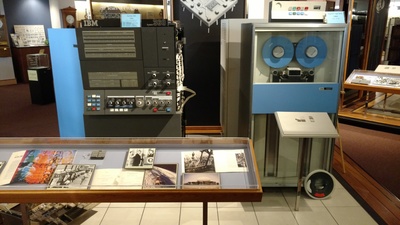 Nearing the end of the first floor ahead, you will spot a large, black computer with many dials and buttons on the front. This is an IBM 360, a very significant product in computer history. Built in 1965, it is noted as something of a successor to the 1401, as it did many of the same things better, and even use the still popular 1403 Printer. Much of this success in performance was due lessons learned from the 1400 Series’ use of the Standard Modular System transistor boards, allowing improvements over time to culminate in the new Solid Logic System. These were similar to the former, but were more stable with circuitry being coated in insulation and higher circuit density resulting in greater power. This integrated system helped usher in what is called the Third Generation of Computers, further miniaturizing circuitry, which would rapidly make computers smaller as well.

Most notable about the IBM 360 is that it was the first computer designed to be customizable with its parts and programming. That is, it possessed the ability for these components to be switched out for various reasons. This opened up a wide variety of possibilities for consumers, who could install a variety of applications, such as disk drives or printers, or upgrade to better versions of existing components as new ones were released. Furthermore, the programming for 360s could be transferred between models, so that data could be saved and put into new 360 models as needed. This allowed IBM to sell a wide variety of components and models for sale, giving people the ability to make their 360’s performance as high as they wanted and carry out whatever tasks they required.

Not only did this revolutionize how people worked with computers, but it completely changed how they were bought as well. Previously, computers would be rented, due to the fact that they would routinely be replaced in their entirety once a better model came out. But with the 360, it made more sense to buy the computer outright, since upgrading the individual parts vastly extended the machine’s viability for use. In the long run, it was cheaper to buy the computer and alter it along the way, rather than make your monthly payment. Compare the 1401’s lifecycle of half a decade before being supplanted with the 360’s reign of 1965-1978. With the IBM 360, the technology took a huge step forward as a product, becoming smaller and a better long-term investment, paving the way to the eventual emergence of personal computers.