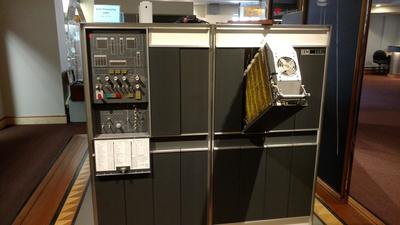 Moving along, you will see two large units on the platform ahead. These are members of the ultra-successful IBM 1400 Series of products, first released in 1959. This line was notable for being their second attempt to implement the use of transistors in commercial computers, which would amplify and switch electric currents better than the vacuum tubes used in previous decades. They had tried this a year earlier with the 7000 Series, creating two models that produced modest improvements in performance. Their successors in the 1400 Series would prove far better designs, enjoying a great success that helped make transistors the essential part of most electronics they are today.

Before moving on, let us address what transistors actually are and how they were used in these machines. Transistors are small components that help guide electricity from one point to another by using conductive metals to guide it. This charge is brought from one location to several others the transistor is connected to, which can be switched between on command. Not only do transistors guide currents, but they are also able to amplify them as well, passing them through circuits with special properties. IBM’s use of the transistor in these early models came in the form of their Standard Modular System, which had various combinations of transistors stationed on small boards. These would simply be inserted into a rack inside the computers, which allowed them to function. While IBM originally intended to produce a limited number of variations of these boards, the increased use of transistors and growing product line eventually forced them to create thousands of different configurations.

The first 1400 Series computer was the appropriately titled IBM 1401. This is the large unit that has a rectangular part with golden sides leaning out of its main body. The computer’s function as to be an accounting machine that would process data fed into it, replacing now obsolete tabulating machines. In this way, you could look at the 1401 as a sophisticated descendent of the previously discussed Hollerith Machine. More important than its ability to manage data, the 1401 was created specifically to be affordable to a wider range of customers. Previously successful computers were often rented out for tens of thousands of dollars a month for use, with more advanced models sometimes costing far more. The 1401 went on sale at the cheap rate of $2,500 a month, offering better performance in a much smaller package. This was successful beyond anybody’s wildest dream, as orders poured in immediately, with the number of sales in the first week exceeding what was expected for the product’s lifetime.

Synonymous with the 1401 was the IBM 1403 Printer. This can be seen sharing the same platform, stationed behind the former. Since you live in the modern world, you have probably used plenty of printers yourself, so its purpose should be obvious to you. It is a device connected to a computer that receives data and transcribes it onto paper for its user. This is an idea that goes back further than computers, however, with printing devices sharing a common origin in tabulating machines. As early as 1910, the US Census Bureau had printing systems built into their tabulators, producing hard copies of their data to file away. IBM had been producing printers to go with various machines for decades before the 1403, but like its partner, the 1401, it would prove to be a landmark success for the company. Previous printers could only produce around 150 lines of text per minute, while the 1403 boasted a revolutionary 600 in its first model. In its first month of availability, the 1403 as rented out to 3,000 clients for a charge of $78,000 a year each to go with newly acquired 1401s. The printer would go on to be bought for use with many other members of the 1400 Series, making it one of IBM’s most successful products ever.