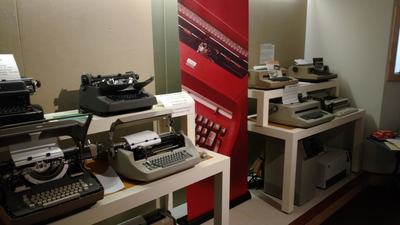 As you move further along the wall, you will arrive at our typewriter section. You should have a basic understanding of these devices from modern computers, whose keyboards are based on the bygone technology. The actual invention of typing systems had no single inventor, with machines such as typewriters being created in various forms over centuries. Their fundamental basis being the ability to impress images is an idea that goes back to the invention of the printing press in 1440 by Johannes Gutenberg, who even created the system of letterpress, which arranged an array letters to produce customized documents of text. This remained the dominant form of printing for hundreds of years, with devices similar to typewriters, granting the ability to type individual letters one at a time, sporadically appearing through obscure inventors. This changed in the 19th century with the Industrial Revolution, when commerce became so rapid that people needed the ability to produce customized text on the fly. This demand saw inventors create machines to fill it, which eventually culminated in the classic design you see before you.

IBM bought the rights to the electromagnetic typewriter from the Electromagnetic Typewriter Corporation of Rochester, New York in 1933. During the time the company produced them, the product underwent several design modifications. The most basic version, which they started out with, used what are known as typebars. This was a simple mechanism where by pressing a letter key on the board, a corresponding bar would lift up and press a stamp that letter onto a piece of paper. The chamber holding this paper would move with each letter pressed, so as to have each letter stamped follow the last. Simple though this was, the design was flawed due to the mechanism routinely jamming. IBM remedied this with their Selectric design in 1961, which replaced the array of typebars and moving chamber with the newly invented typeball mechanism. This was a golfball-looking instrument with every letter of the alphabet molded on, which would turn and move with each key pressed, stamping the appropriate letters in the appropriate place. This was a much faster, more reliable typewriter which sold extremely well and produced enormous profits for IBM.

The next innovation to the typewriter came in the form of capturing memory. In 1967, IBM introduced a new typewriter that utilized insertable magnetic cards, which could capture and repeat a sequence of key presses. This was a significant advancement, essentially allowing people to save data in a way similar to how we do so with word processors on computers today. Users could also remove these cards and share it with others, allowing them to reproduce its saved sequence of text. The only real problem was that these card’s limited physical space typically only allowed for a maximum of 5000 characters of text to be saved a piece. This prompted the invention of an alternative model in 1984 called the Wheelwriter, which used an internally kept magnetic ribbon that could capture far more key presses. These had the unfortunate flaw of not being able to share their ribbons like one could the cards, limiting the saved data to the machine it was recorded on. With the advancement of these typewriters, many of the elements that would come to later define personal computers fell into place.