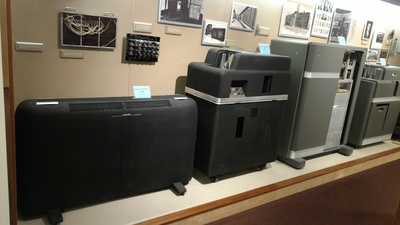 World War II had grown IBM immensely through wartime production, forcing the company to open more facilities than ever before to fill government orders. While this had been tremendously profitable, the absence of war left something of a dilemma; one that other businesses who had also expanded during the war faced. The cost of doing business had increased to match the company’s new size, yet they no longer had a guaranteed buyer in the government. Rather than cut staff and downsize drastically, Thomas Watson instead decided to redistribute its assets internationally. In order to administrate this change, he founded the IBM World Trade Corporation in 1949, giving it the slogan “World Peace Through World Trade.” This subsidiary of the company was given great latitude to act freely, founding similarly independent branches of IBM globally in the intervening years. In this way, IBM not only maintained its wartime size, but expanded into the global business empire we know it as today.

If you look along the wall, you will see some of IBM’s popular products of the time. The many machines we have already highlighted, such as tabulators, keypunches and card sorters, still sold very well. Joining their ranks in the late-40s was the electronic calculator, which was able to perform mathematical sequences previous machines could not. The Model 603 you see here was the first of its kind to be produced in significant numbers. It was able to multiply, reading two numbers punched onto a card, then produce a result on the paper’s other end. A little-known fact of the Model 603 was that it actually had the ability to divide as well, but the company did not advertise this due to a lack of confidence in the feature. Further down, you will see the Model 604 that replaced it. Released only two years later, it was superior in every way to its predecessor, being able to not only multiply and divide, but also add and subtract too. The Model 604 was also hundreds of times faster at performing its calculations, making it one of IBM’s most efficient machines at the time of its release. These machines were a significant asset to any organization that needed to do math in precise, routine ways, such as the space program, who used them in their early days.

Impressive though these new machines were, the defining transformation of information technology in the post-war era was the emergence of commercially available computers. The term “computer” is vague, denoting any device that performs calculations or computations, meaning a great many things could be considered one. Indeed, people have looked back in history and found many inventions that could technically qualify as the first computer. One might even consider the electric calculators we just reviewed to be computers, but the key difference is that the latter term would come to be applied to machines able to carry out a greater range of logical functions than arithmetic. In 1951, the Remington Rand Corporation began selling its UNIVAC line, introducing the first commercially available computers. These were able to not only perform a larger range of functions than calculators, but do multiple routines at any given time. UNIVACs were massive, being nearly 40 feet long and 8 tons per unit, illustrating the vast gulf of sophistication between computers and earlier products. They became a major success for the company, but it was not to last long. IBM was quick to compete, releasing its own commercial computer, the IBM 701, only a year later. While the two computers were roughly equivalent, with an advantage or two in different areas attributed to each, the 701 would eventually trounce the UNIVAC in sales. The deciding factor in their competition was decided entirely by IBM’s far superior salesforce, who were significantly more numerous, aggressive and well-practiced than Remington’s. Within a few short years, IBM dominated the emerging computer field with an 85% share of the market.

It is worth noting the piece of technology that allowed these fantastic machines to function: the vacuum tube. You should be able to find several of these in this general area. They are the glass cylinders with metallic mechanisms inside. These had multiple functions, with the most common being to produce a strong electric charge. They functioned by isolating components in an airtight vacuum, then heating an electric wire so that it would discharge a great deal of electrons, thereafter passing this charge on to the device it was connected to. This process allowed the electronics that used them to carry out far more complex tasks that required greater electric power. The early computational machines that used vacuum tubes required a tremendous number to function, such as the Model 604 Calculator, which contained over a thousand. This extreme amount needed was an issue compounded by the fact that vacuum tubes wore out quickly, thus being frequently replaced. They helped produce technological marvels at the time, but it was clear that later computers needed to become more reliable and efficient in ways that vacuum tubes could not provide. It would not be long before an alternative presented itself in the form of transistors, which we will address later.