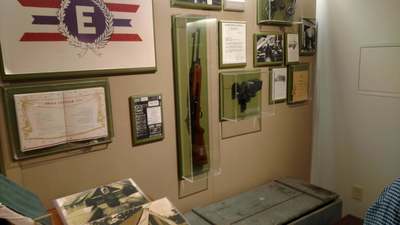 At the back wall of the museum, you will find our World War II display. Since this momentous event completely redefined the world we live in, you are probably familiar enough with the subject that we do not need to recount its nature. IBM’s participation in the war, however, is a matter worth highlighting. Because of the company’s incredible success, it had already expanded its business worldwide. In the run-up to war, many nations attempted to technologically advance as rapidly as possible in many areas, anticipating the inevitable conflict to come. As the undisputed juggernaut of the information technology industry, governments that ended up on both sides of the war turned to IBM, and would use its products to great effect in throughout the event. Among these, the United States stood as the business partner IBM was most closely tied to, both for it being an American company, and for the incredible support the government had provided in the past. During the war, IBM would throw its full weight behind the US war effort, once again finding great reward in the partnership.

The most unique way that the company changed its operations to aid in the war was to produce arms for US soldiers. IBM repurposed many of its facilities for this purpose. Here in Endicott, several parts were produced to create M1 Carbines, one of which you can see mounted on the wall. This model was emblematic of the American soldier during not only World War II, but conflicts that emerged over subsequent decades, still enjoying popularity today for its excellent reliability. Two facilities here participated in M1 production, designated Endicott Forging and Union Forging, both named after this area, and were respectively located where the Toyota dealer and Schafer Bus are today. IBM produced other materials for the war effort as well, including firearms like Browning Machineguns, components for military vehicles, and, naturally, its regular line of products.

World War II was a conflict defined by technological advancement, almost as much as the fighting itself. By the conclusion of the war, technology like the first jet aircraft, rocket systems and nuclear power had emerged, all developed to keep warring nations competitive. IBM did its part in this race to stay on top by developing several advanced systems of its own. The most significant of these was the Automatic Sequence Controlled Calculator, better known as the “Mark 1.” This is the large machine you can see pictured on the wall. Mark 1 was an extremely sophisticated electronic calculator, which was able to perform every form of basic arithmetic at high speeds. It was built right here in Endicott, inside Building 32 on the company campus, otherwise known as the clocktower. At the time of its creation, it was arguably the most advanced machine on Earth, with only the British computer-prototype “Colossus” rivaling it for that distinction. Coming in at an incredible 51 feet in length, 8 feet high and nearly 5 tons, the Mark 1 was huge, using 530 miles of wire and hundreds of thousands of components, including a motor and massive driveshaft housed inside its structure. It received information like most of the machines we previously exhibited, with paper being fed into it, but could also receive data manually using 60 different arrays of switches. The numbers fed into the Mark 1’s system could be added or subtracted multiple times a second, and perform the considerably more difficult tasks of multiplication and division several times in a minute. Many important projects were aided with the use of Mark 1, contributing to the government’s development of war assets, but the most notable of all was its inclusion in the Manhattan Project. Scientists from Los Alamos Lab, who normally used IBM tabulators, petitioned to use Mark 1 because of the limitations of their normal machines. In so doing, they were able to test the first mathematical simulations for the atomic bomb. Without the Mark 1’s contribution, the status quo at the end of the conflict, as well as that of the Cold War going forward, would have been quite different.

IBM benefitted from World War II in many ways, and was very supportive of its workforce throughout. Many employees ended up drawn into the fighting, whether by enlisting or the draft. For these people, it was guaranteed that they would find their job waiting for them when they returned. Those who unfortunately died were honored by the company; you will see on the side wall a picture memorializing the fallen. One percent of profits made from war supplies sold to the government were funneled into a fund to help the widows and orphans these people left behind. This amounted to a great deal, considering how prosperous IBM was during the war. Between the years of 1940 and 1945, the company’s revenue tripled to $140 million a year, and the workforce swelled despite losses to the war. Thomas Watson made the most of the situation, using government funding to expand the company’s production facilities. A number of new buildings were added to the IBM campus in Endicott at this time, intended for war production. More notably, however, was his gambit to build the facilities found in Poughkeepsie. Watson anticipated that the war would end soon, so he accepted funds for these facilities, but never fit them for war production. It turned out that he was right, and the conflict ceased just as the installations were being completed, providing brand new buildings at no cost to the company. Thus, IBM stood tall during World War II, taking care of its workers and only growing stronger, as it had in all previous times of crisis.