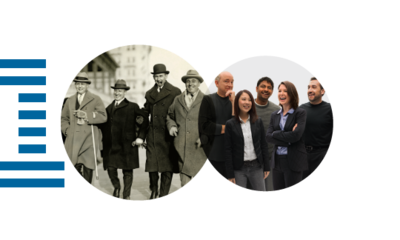 One of the most notable aspects of IBM was its creation of a company culture. Much of this was due to the leadership of Thomas Watson, whose unique ideas of how to run a business made IBM stand out in the corporate world.  At the time that Watson originally took over, the company had extremely low morale and a great deal of infighting. His solution to this was to tie people’s identities to the company, making them invest their whole spirit in its success. Thus, he stressed to employees that they were not simply workers, but partners in a grand endeavor, destined for greatness, and that they would share in the glory. He increased cooperation between employees by creating a sense of collective identity as well, mandating a strict set of rules and consistent dress code of stiff white shirts that everybody is held to. This worked wonders, creating a highly dedicated workforce that continues to define IBM today.

The hallmark of Watson’s leadership was his slogan “THINK,” which he carried over from National Cash Register. Signs with the slogan were hung all around IBM facilities to remind people of the mantra. The exact meaning of this has always been vague, but Watson represented the idea that it means employees should always give full consideration to things, as well as go the extra step when it comes to creative solutions. This has often been humorously lampooned over the years for its obscure meaning, such as with Apple’s “Think Differently” campaign in the 1990s. Despite the mixed opinions, THINK has remained a slogan for IBM to modern day.

Another aspect of company culture that derived from Watson was his well-known no drinking policy. This also came from his previous experience, dating back to an incident when he was still in sales. At that time, Watson traveled in a horse and buggy, carrying sample cash registers to show off. After a particularly successful day, he decided to celebrate by drinking, only to find that his horse, buggy and samples had been stolen once he stumbled out of the saloon hours later. Fearing the same might happen to others under his leadership, Watson banned drinking from his salesforce. Even today, IBM policy holds that no drinks will be paid for on their company credit cards.

Watson proved that the idea of employees sharing in IBM’s glory and success was no mere rhetoric with the vaunted 100% Club. If you look along the wall of our World War II section, you will see a display dedicated to this aspect of the company. Every salesman was given a quota of transactions to reach yearly, which was usually set as an ambitious goal. Those that filled this quota were thereby inducted into that year’s 100% Club, who would meet in a weeklong annual gathering to feature entertainment, dinners, public recognition and held the potential for promotions to be announced. Up to 1940, this celebration would take place at the Waldorf Astoria in New York City. However, IBM’s workforce eventually swelled and performed to such a high degree that they were forced to hold these events outdoors in large tent cities. The 100% Club continues today, representing the shared dedication between IBM and its employees.