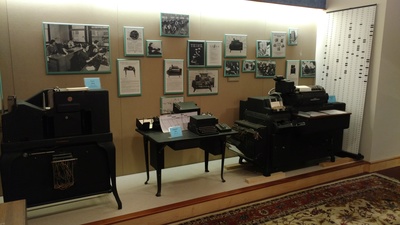 IBM During the Great Depression (4:51)

If you move to the corner ahead, you will come to our section detailing IBM’s history during the Great Depression. This was a period between 1929 and 1938, when the entire world was plunged into a deep economic downturn, resulting in sweeping, permanent change for all nations effected. Tough times were had by all, including IBM. Stock prices were low, and customers were less able to buy the company’s expensive services. Many businesses were ruined by the event, even ones as large and influential as IBM, but the company remained firm and survived the tumultuous period.

Thomas Watson took the Depression as a challenge more than anything, deciding to lean into the catastrophe. This unconventional approach meant defying conventional wisdom on how to navigate businesses through a bad economy. Perhaps his most famous decision at the time was to not cut costs by laying off workers. This was a bold decision to say the least, especially when you consider that this was a time when 14-25% of the nation went unemployed. But more astoundingly, Watson actually decided to expand the company precisely when they could least afford to. Not only did he hire on more workers, but he offered them new benefits such as life insurance and paid vacations. Here at the headquarters in Endicott, he built a brand-new research lab and training facility on the IBM campus. Although business was bad, the company was kept performing better than ever in its services and the innovations it offered. Once the Depression lifted, this proved a major advantage over the competition, who would struggle to get back to the level of performance Watson had preserved at great cost.

The key development during the course of the Depression that helped IBM survive was the creation of the Social Security Administration. This was a proposed agency of the government that would tax people’s incomes and reserve that money in a common fund for elderly citizens after they retired. Watson recognized the potential business in this proposal, which would require many of the tabulators and calculators IBM offered, and went about producing these machines in great quantities. Since these did not have buyers, Watson stored the enormous number produced in every warehouse available, and even rented out barns here in Endicott to supplement the task. At the time, people thought Watson had gone cray, not realizing President Roosevelt had already assured him that Social Security was going to pass. Once the act was approved by Congress in August of 1935, it all paid off, with the government not only buying all the machines stored away but ordering countless new ones customized to their needs. It was one of the greatest business maneuvers in Watson’s life, both redeeming the extremely risky strategy he had adopted from the beginning of the Depression and growing IBM in the face of one of the worst financial crises in world history.

The products that defined IBM’s operation during the Depression the most were the IBM 405 Accounting Machine and Model 77 Collator. The former was the most advanced tabulator to date, improving on all aspects of the technology since the Hollerith Machine, while introducing new innovations. Principally, it was the first of its kind to process information in an alphanumeric way, translating binary information into letters by recognizing specific patterns of ones and zeros. When it was first produced in 1934, still fairly early in the Depression, its performance tabulating 150 cards per minute represented the state of the art in data processing. It was this specific machine that Watson planned for use by the Social Security Administration, and was horded by him in storage the most. To go with this, IBM developed the Model 77 Collator, which sorted cards being tabulated. Workers would place two piles of cards in the side of the machine, then it would automatically sort them, recognizing the card’s data from the holes punched out, then feed it to one of five bins on the other side with others of its kind. Sorting at a rate of 240 cards per minute, it had the speed to match the 405 Accounting Machine, and went on to share in its grand success. These would remain the cornerstones of IBM’s product line for years, until war required even greater technological development.