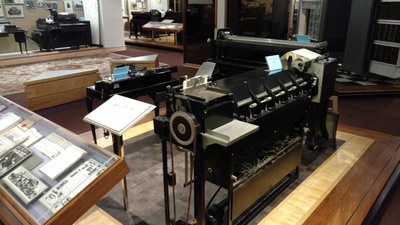 The early years of IBM saw the production of products that defined the companies that preceded it. Those operations continued to function in a largely independent fashion as Watson began the process of tying them closer together into a greater whole. These were years defined by the advancement of existing products, pushing forward information technology through the continual improvement of their designs. To go with these, some new devices were built to supplement their use, creating a system of interrelated products that businesses came to depend on.

If you look at the second platform, behind where the Hollerith Machine is located, you will find some of these early products. Notice the Type I Printing Tabulator; this is a key example of the gradual evolution of tabulating machines. After Hollerith applied their use to the census, his business partners quickly recognized their potential for use in accounting and inventory. Thus, much of their development in the intervening years were to adapt them for use in these areas. This was best done by IBM with the introduction of the Type I model, which introduced a new control panel for programming. This replaced the array of mercury and electrified pins with a plugboard, allowing users to customize the machine processed data. To do this, they would take cords and plug them into the various sockets on the board, thereby sending its specific electrical signal through to the tabulator. Later models would improve the plugboard in various ways, such as adding sockets for ever-more specific data, and making it removable for easier programming. This model exhibits another key innovation with its printing ability, allowing it to transcribe the data it processed onto paper for users. Future tabulators would become synonymous with printers, whether connected to the device or as separate machines.

For decades to come, punch cards would continue to be the principal means of feeding data into tabulators. To aid in filling out these cards, IBM developed keypunch mechanisms, such as the Type 16 model seen on the platform. This is another mechanism that went back to Hollerith, who included rudimentary devices with his original machines that helped mount and puncture cards. In 1901, he took the first step toward making this process easier by attaching a keyboard, which would punch its needle down onto the card in a specific place indicated by the key pressed. This allowed users to rapidly fill out cards in a way similar to how typewriters later worked. IBM turned this into a major product in 1923 with its introduction of the electric keypunch, utilizing solenoid magnets in its mechanism to punch cards, making the process require far less effort. The Type 16 you see here was actually a later innovation, released in 1930, possessing an automatic mechanism that fed cards through as they were punched.

Punched cards went on to be used in both increasing amounts and increasingly complex ways. As machines became more efficient, they left workers scrambling to organize and file away the many cards they rapidly processed. Furthermore, many of the new tasks machines were being used for required them to begin reading different cards in specific sequences to carry out their function. This left many companies desperate for a way to manage cards as fast as the machines that used them. Typically enough, Hollerith anticipated these needs, inventing the first card sorters in 1901. These functioned in a genius fashion, detecting what holes were punched out on each card with magnets that guided them to their appropriate repository as they were fed through with a belt mechanism. IBM continued to develop these to keep apace with increasing challenges, improving their speed and ability to sort. The model you see on the platform was the first in the Type 80 Series, which doubled the sorting speed of previous models at an incredible 450 cards per minute. The Type 80 line would remain popular for decades, becoming substantially faster with each new model released.

The substantial number of cards being used by companies eventually became so large that it became cheaper and more efficient for them to produce their own. IBM facilitated this possibility in 1924 with the Carrol Card Press. If you step away from the platform and look around the corner to its side, you will find one mounted for you to observe. People would load them with six-foot-long rolls of paper, which it would print on and cut into various types of cards, depending in its settings. Often times, these would be kept producing cards /7, highlighting business’ growing dependency on tabulating machines. IBM made a fortune on these, since for a long time they were the only company producing machines of its kind. At the height of their use, the Carrol Card Press was responsible for a full 25% of the company’s profits.