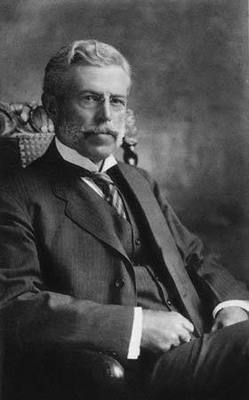 On this wall, you will see the picture of a man. This is Charles Flint, the man who merged the three companies previously discussed into the giant that is IBM. Born in 1850, Charles grew up watching his father Benjamin’s great success as the founder of his own business. This was a merchant fleet operating out of New York City named Chapman & Flint, which in its heyday was noted to be the second largest of its kind in the United States. It is perhaps due to his father’s influence that Charles went into business himself. In time, Charles would prove even more successful than his father, being named among the great titans of American industry.

At the very young age of 21, Charles would use his father’s connections to become a partner in a company named Gilchrest, Flint & Co. This was a business that produced supplies for merchant fleets. His success in the area of shipping did not stop there, however, as he would move into a wide variety of enterprises in the field. Most notably, Charles made a fortune converting merchant vessels into warships, then selling them to governments worldwide, as he did with Japan in the runup to the Sino-Japanese War and the United States during the Spanish-American War. His most significant success was a partnership between Gilchrest/Flint and a Peruvian shipping company named W.R. Grace, which produced millions in profits. It was this experience that lead him to regularly attempt consolidating smaller businesses into large entities. He would do this many times over the years, earning him the nickname “The Father of Trusts,” meaning monopolies.

In the early 1900s, Charles saw an obvious opportunity to perform another of his mergers with the emergence of the burgeoning information technology industry. His interest turned to three major innovators of the field: the Bundy Time Recording Company, Computing Scale Company and Tabulating Machine Company. After currying favor and buying stock for several years, Flint made his proposal to the owners of each in 1907. He reasoned that if one company had a bad year, which was sometimes an issue, they would be preserved by the profits of the others. This proposal was eventually accepted in 1911, and the three businesses merged into the Computing-Tabulating-Recording Company, with their headquarters founded here in Endicott. If you look up on the wall, you will see the company’s logo. They would later rebrand themselves the International Business Machines Company in 1924, otherwise known as IBM.