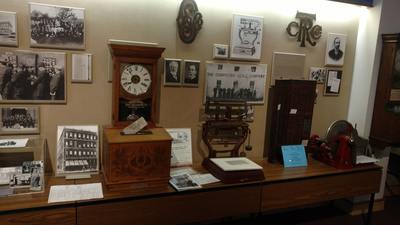 The next organization that would combine to form IBM was the Computing Scale Company. The basis for this business was the eponymous computing scale device, invented in 1885 by a man named Julius Pitrat, in Gallipolis, Ohio. This is a machine still very much in use today, which calculates the cost of products based on their weight. Pitrat’s original design saw limited success under his direction, until it caught the eyes of businessmen Edward Canby and Orange Ozias six years later. They immediately saw its potential and offered to buy the patent, forming the Computing Scale Company upon their successful acquisition of the invention.

Computing scales are an exceedingly simple machine. You can see them further down along the wall that our time recorders are exhibited. All one has to do to use the device is set the price per pound at the top of the machine, then place the object for sale on its large scale at its base. The machine will then weigh the object and calculate how much it costs based on the price per pound, reading out the price on one of the beams at the top. You have probably seen a modern computing scale used at your local supermarket, where butchers calculate the price of meat they put on sale. This is in fact the machine’s intended use, as Pitrat designed them specifically for the meat industry.

By the time of his invention, Pitrat was already elderly at the age of 68, and did not live long after selling it to Canby and Ozias. The latter’s formation of the Computing Scale Company, however, would go on to have success selling to grocers throughout much of the Midwest. This caught the attention of Charles Flint in 1911, then leading the International Time Recording Company, who recognized the worldwide potential of computing scales, prompting him to buyout Canby and Ozias. Under Flint’s direction, the Computing Scale Company went on to be one of the most profitable ventures in the family of businesses that eventually combined to form IBM.