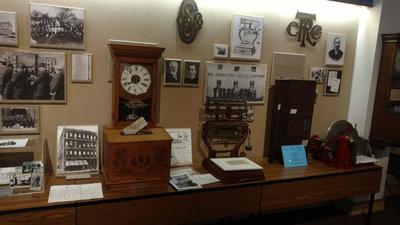 The next organization that contributed to the founding of IBM was the Bundy Time Recording Company. Formed in the 1880s, this business was predicated on the manufacture of timekeeping devices. It was founded by two brothers, Willard and Harlow Bundy, of whom the former invented their main product: The Key Recorder. This was a machine that tracked the amount of time that workers would be on the clock, and thereby allowed companies to pay them the correct amount for their labor. At the time of the Key Recorder’s invention, the Industrial Revolution was in full swing, seeing more workers employed by businesses than ever before. This made such time keeping devices absolutely essential going forward, and as the business that held the patent for the first machine of its kind, the Bundy Company became incredibly profitable.

On the wall to your left, we have several time clocks that Bundy produced here on display. The first to note is the original design that used keys. That is the essential component of this model, which every employee in a company would operate using their own personal keys. When logging in at the beginning off their shift, the employee would simply insert their key and turn it, activating a stamp inside that would record the time on a roll of paper. One their shift was over, the worker would repeat the process, recording the time again on their way out. Managers could thereby know the exact amount of time a worker was on the job each day by comparing those two recordings.

The Key Recorder was later improved upon with several updated models using different mechanisms. The first successor, seen further along the wall, was operated with a dial. Using the leaver on this dial, employees would be able to charge the information being recorded on the paper below, shifting it to indicate facts like log-ins, lunch breaks and log-outs. The recorder would later take on its defining form with the punch card mechanism, which combined many of the prior innovations. Employees would have single cards per day instead of keys, which they stuck into the machine to record the comings and goings of their shift. This was a substantial improvement, saving time by replacing the difficulties of reading through rolls of paper with everybody’s information on it, with the simplicity of cards filed away that represented each employee’s specific days of work.

The Bundy Company was located in Downtown Binghamton, where the Boscov parking lot is today. They founded the company there in 1889 with $150,000 in capital, which amounts to over $4 million in today’s money. Initially, this location operated with only eight employees, who produced thousands of time recorders over the next decade and a half, before a second location opened in Endicott to expand operations. This location became known as the Bundy Building, which can still be found on the IBM campus today. Despite their incredible success, the Bundy brothers eventually had a major falling out over a family squabble, going their separate ways in 1903. Willard and his son moved to Syracuse to form a new company, only for him to pass away a few years later. Harlow remained here, retaining his stake in the company for years to come; his house remains preserved in Binghamton to this day as the Bundy Museum.