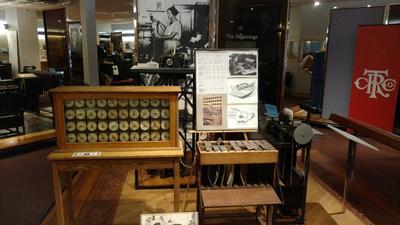 Perhaps the most significant business to contribute to IBM’s creation was the Tabulating Machine Company. This was a very historically significant venture, as it made its money by selling the Hollerith Machine, the world’s first automatic tabulating machine ever made. If you look at the first platform in the museum, you will see a wooden table with a variety of dials contained behind a pane of glass. This is an original model; one of only three known to still exist. The others are held by the National Museum of American History in Washington DC, and the IBM Museum in Böblingen, Germany. It was a revolutionary machine that helped formed the basis not only for IBM, but much of the advancement in information technology to come as precursors of the modern computer.

The Hollerith Machine’s origin comes from an 1888 contest held by the United States Census Bureau. Per the constitution, the state is obligated to enumerate its citizenry once every decade, so as to better conduct government planning. However, by 1880, the United States’ size and population had grown so large that the Census Bureau simply could not process all the data quickly enough. An entire decade would pass before a proper census would be tabulated, meaning they would have to start all over again once they finished the last one. Thus, the contest of 1888 was announced, offering anyone who could invent an automatic machine for the process exclusive business tabulating upcoming the 1890 census.

It just so happened that the perfect person for the job already worked for the US Government. Herman Hollerith, who worked as a member of the Treasury Department, caught wind of the contest and decided to apply his talents to the task. While Herman was still fairly young at that time, being only 29 years old, he had already demonstrated great talent at inventing, previously obtaining patents in both electromagnetic and vacuum brake systems for locomotives. Hollerith held an edge in the contest as well, previously working for the Census Bureau, helping to tabulate the very data to be processed. In the event, three contestants rose to the challenge, each inventing their own tabulating machine. The other two inventors produced impressive results, with the data they were given being processed by one in 144 hours and another in only 100. But Hollerith’s machine was on another level entirely, completing the same process in only 72 hours. Not only that, but the Hollerith Machine was able to tabulate demographic specific information, such as age or race, an astounding ten times faster than the others. Hollerith won the contest, going on to have his machines not only process the 1890 census, but every census from then until the 1950s.

The Hollerith Machine functioned in a deceptively easy fashion. If you look in the area around it, you will see some images of people using the machine, which you can use as we hereby explain the process. The first step was still manual, which saw census workers going to people’s homes to record people’s information by hand. This would include facts such as age, race, sex, religion and more. Then, another worker would take a punch card and punch out the sections of the card corresponding to this information. On a side note, Hollerith designed the machine to process cards the size of 1980s dollar bills, so that the Bureau could reuse storage boxes from the Treasury to save on costs. Once one of these cards were punched with the correct information, it would be inserted into a reader. This was a device connected to the machine, possessing a bed of electrified pins that you would press onto the card, which rested atop an array of mercury. The areas of each card that were punched out would thereby allow a pin to pass through its hole, touching the section of mercury below and sending an electric reaction from it to the Hollerith Machine. The dial on the machine corresponding to the mercury stimulated would thereby move forward, adding to that particular demographic category in the overall tabulation. Thus, the Bureau would process a great deal of cards through the machine, then add up the results on its dials to compile that data into the overall census.

The Hollerith Machines allowed the Census Bureau to cut the time of its data processing down from nearly a decade to six years, using far less people. Later iterations of the mechanism would prove far faster in subsequent decades, even as the United States population continued to soar. The Tabulating Machine Company was founded in Washington DC with the 1890 census, enjoying extreme profits by selling its product to nations worldwide. The building can still be found there today, preserved as a historic structure. Hollerith became too greedy, however, as he demanded an extremely high charge to process the US census in 1900, causing the government to create a design of its own that cut him out of future censuses. After a series of mergers that diversified the company’s business, Hollerith accepted a buyout offer from Charles Flint in 1911 for $2.3 million, paving the way for the creation of what would become IBM.