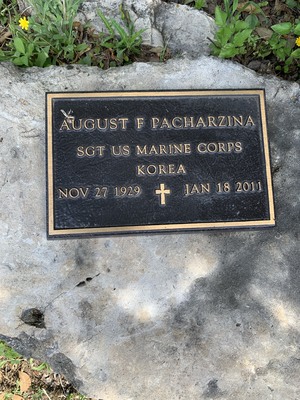 The BBQ pit at St Luke's on the lake was made in 1994 and was modeled after the BBQ pit at St Thomas-More but is a little bit bigger here. The pit was made and organized by August F. Pacherzina who was a Sgt. in the US Marine Corps during the Korean War and was alive from November 27th 1929 to January 18th 2011. Before the Men at St. Luke's or anyone would cook at the pit, they would ask for Pacharzina's blessing. The BBQ pit can cook around 200 chicken halves at once and we cook around 325 chickens a year but have cooked 8,000 chickens in all. Over the past 25 years we have raised over $40,000 for fundraising using the BBQ pit. Mr. Pacharzina and the BBQ pit are very important to St Luke's and are both greatly remembered to this day. In 2011 the Church put in a plaque for Mr Pacharzina and shows his great accomplishments, shown in the photo. The pit and plaque are located near the plaground and upper parking lot on church campus.