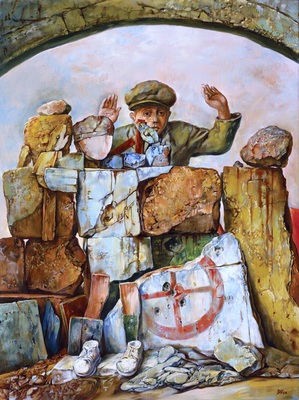 Bak incorporates the well-known image of the Little Boy in the Warsaw ghetto, a photograph that has become a symbol for the more than one million Jewish children killed in the Holocaust. In this work Bak presents both the Little Boy and his fabrication. Both figures are situated under a stone arch that is shaped like a drab, washed-out rainbow. Behind a wall made out of rubble stands the Little Boy with his arms raised. Meanwhile, the fabrication of a faceless boy, also with his hands up, is fashioned from parts of rock; nails appear through his palms. White shoes lie in front of the bombed out rubble. Blood stains the jagged stone. Bullet holes pierce a red target. Small pebbles again have been placed on top of the wall as on a grave marker. The wounds in his hands evoke the stigmata as it parallels those Christ received during the crucifixion. The wall acts like an altar. In the Hebrew Bible altars were often made of unwrought stone. The Hebrew word for altar is mizbeaḥ (מִזְבֵּחַ) meaning “to slaughter.” The scene reminds us that in wars and genocides, women and children are frequently marked for death. Both the Little Boy and the memory of the Little Boy have come under siege.