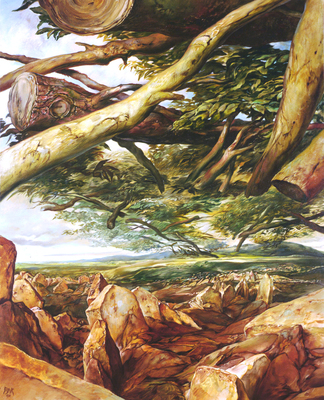 9. Under the Trees (Back Gallery)

Disobeying the laws of nature, a grove of trees hover on their sides above the landscape. The tree-filled landscapes that appear in paintings from Bak’s Return to Vilna series are powerful reminders of Ponary, a suburb of Vilna. There, Germans executed thousands of Vilna’s Jews, shooting them and throwing their bodies into a pit. Among those killed at Ponary were Bak’s paternal and maternal grandparents and his father. Below the trees, hundreds of tombstones pierce the ground, their peaks creating serrated paths through the landscape. The ensemble of trees forms a protective mesh that shelters the tombs while simultaneously making them visible - drawing attention to what the Nazis tried to conceal. After burying the bodies, in a furtive attempt to destroy the evidence of their actions, the Nazis exhumed the bodies and burned them. They were not successful in hiding their crimes. The trees remind us of our duty to not let what took place in Ponary and dozens of other locations to be forgotten. The responsibility of passing down the knowledge of the Holocaust to future generations belongs to everybody.