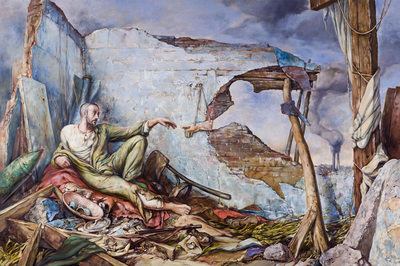 8. Creation of Wartime III (Back Gallery)

Bak based Creation of Wartime III on Michelangelo’s renowned Creation of Adam from the Sistine Ceiling in Rome. The famous Renaissance artist served as an inspiration for Bak from his childhood, when he found a discarded postcard depicting Michelangelo’s Moses. The similarities between Bak’s and Michelangelo’s representations end with the juxtaposition of God and man and the outstretched arms that nearly meet at the fingertips. For Bak, it is not the creation of humanity taking place, but already having created man, the aftermath of war. References to war and man’s destructive capability abound in the painting. Clothed in a tattered uniform, Adam sits on a pile of debris at the corner of the remains of a house. Besides two fragmentary walls, all that is left of the comforts of home are a few dishes, worn shoes, dirty blankets, and a broken chair that form the mound on which Adam reclines. In the corner, the tail end of a missile is visible, while another ominously points in Adam’s direction, suggesting that more devastation is yet to come. Opposite of Adam is God, or, rather, the shape of God formed by the gaping hole in the back wall. Where was God during the Holocaust? – a question asked by the billowing crematorium chimneys that emerge from God’s absence. The cross on the right wrapped with a prayer shawl is a reminder of Christ’s Crucifixion at which time he too questioned God’s willingness to intercede.