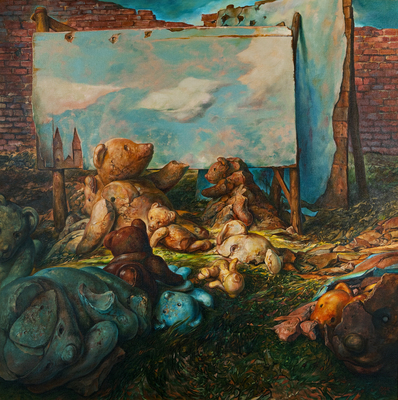 7. Skies Were the Limit (Back Gallery)

In Skies Were the Limit the aftermath of a massacre or battle consumes the foreground space. Instead of dead and wounded soldiers, stone teddy bears of various shapes, sizes, and states of wholeness, are the victims. In numerous representations, Bak selected the teddy bear as a symbol of what he saw as the greatest atrocity of the Holocaust: the murder of countless innocent children. The artist narrowly escaped an Aktion, when all of the children at the German labor camp, where he and his parents lived, were rounded up in a courtyard and shot before their grief-stricken parents. He also experienced the death of his childhood friend, Samuel, who was brutally gunned down by soldiers. Reminiscent of a stage prop and serving as the backdrop of this horrific event, two enormous panels are painted with a large stretch of blue sky filled with soft, pillowy clouds tinged with pink. These substitute skies are not the real sky just as the potential of every Jewish child to lead a happy and productive life was not real. Skies were the Limit before the Holocaust, now there is only a representation of a sky, the vision of what could have been. A reference to the small number of children who survived the Holocaust, including the artist, the surviving teddy bears seek out the large teddy bear whose head is positioned next to the painted towers of a church. Contributing to his survival, Bak and his family sought shelter in a Benedictine convent. At the top of the painting, only a sliver of sky is not blocked by the brick wall. For a few survivors, skies were the limit.