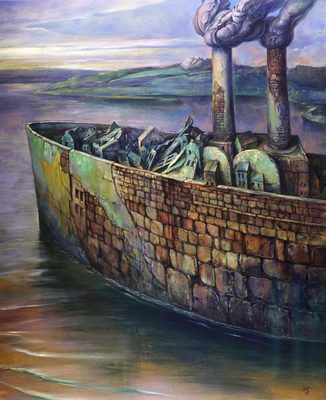 A large ship attempts to move across the water toward a distant landscape. Composed of stone blocks, the ship is no longer seaworthy, ensuring that the journey will not be successful. Painted on the front of the ship, a faint gold Star of David identifies this ship and its cargo as Jewish. The Germans required that Jews wear the Star of David on the front and back of their clothing at all times. This ship’s passengers are not specific people, but rather an entire community, symbolized by the miniaturized houses. Evident in the flattened, faded and fragmentary condition of many of the buildings, this community has suffered great losses. Another reference to the destruction of something sacred to the Jews, the wall-like appearance of the side of the ship recalls the wall of the Temple of Jerusalem. At the center of the ship, houses form the foundation of two towering crematorium chimneys. The Tablets of the Law, which seem trapped between the survivors and the chimneys, are blank and imply God’s absence during the Holocaust. The covenant that God made with the Jews was suspended during the Holocaust.