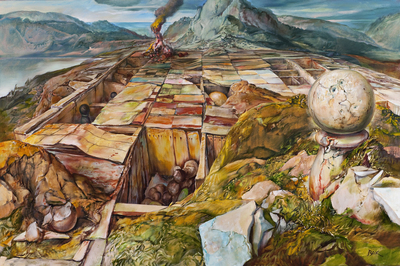 In Dismissed History the landscape has been transformed into a war-torn chess board. Bak’s interest in chess was both personal and metaphorical. He began to explore the motif in the 1970s in memory of his step-father, Markusha, who had been an avid chess player. Bak struggled watching Markusha’s keen mind deteriorate in the grip of Alzheimer’s. In Dismissed History, a few of the chessboard squares are laid open, revealing compartments or hidden rooms that contain chess pieces. In the largest chamber in the foreground, the chess pieces are heaped on top of one another. The inhabitants, who take the form of pawns, did not survive the attack. In other chambers, a few of the pawns seem to have fared better. To the right, a large pawn, bearing the marks of multiple wounds, rises above the destruction. In the background, smoke billows from a large fire – the remnant of the destruction that took place. Surrounding it are more pawns who will soon be consumed. A metaphor for war, there are no real winners in this game of chess where everything has been laid to waste. Bak’s images of chess subvert the viewer’s expectations, evoking a world where rules no longer apply with a game that is sustained by rules. Instead of precise, glossy squares and polished knights, pawns, and bishops, Bak’s participants are the battered and mutilated forgotten by history.