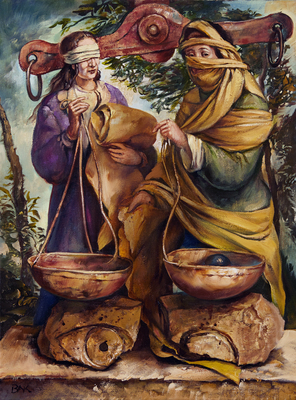 This work depicts Lady Justice and Blind Justice. In most portrayals, Lady Justice is depicted wearing a blindfold, which represents impartiality, the idea that justice should be applied without regard to wealth, power, or other status. In this painting we see two women hold strings attached to scales, which are disconnected from the balance beam. Indeed, the scales are broken or in disarray. Both women are wrapped in the tallit—the prayer shawl, which is worn during mitzvah, the commandments commanded by God. One woman can see, while the other cannot. However, while Lady Justice can peek through her blindfold, she is wrapped much tighter than Blind Justice. The prayer shawl appears pinned under the stone eye. The scales sit atop of stone eyes that have been broken. This represents “an eye for an eye” or Lex talionis, which means retaliation or compensation as authorized by law. Does the fact that the eyes are broken mean that for some crimes, compensation or retaliation is impossible? Also note that a weight is placed only in Lady Justice's scale platter, but not in that of Blind Justice. Thus, does "seeing" create a heavier moral burden than justice as blind?