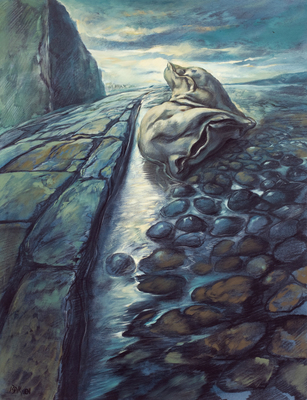 3. To the Ghetto (Hallway Gallery)

This work refers to the thousands of Jews who were forced to leave their homes and enter the cramped conditions of the Vilna Ghetto. Instead of illustrating the crowded streets and mass confusion accompanying this event, a shrouded bundle lying abandoned on a cobblestone street becomes its embodiment. The somber blue tonality and pools of water at the edge of the street reinforce the collective sorrow of this injustice and recall the rainy conditions of the day Bak and his family were led toward the Ghetto. It is significant that the wrapped object lies in the street and not on the sidewalk, since Jews were no longer permitted on the sidewalks. The similarity of the discarded heap to a crumpled pillow also evokes the young Bak’s decision to abandon his rainsoaked pillow on the doomed journey when it became too heavy to carry.