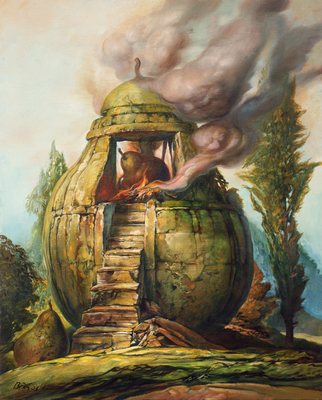 Pears appear over and over again in Bak’s paintings, assuming numerous guises and contexts. The artist was fascinated with the fruit, believing it to be the true fruit from the Tree of Knowledge. He also viewed the pear as a metaphor for the vulnerability of humans. By manipulating its substance, he inflicted various situations and meanings on it. Here, a monumental pear dominates the surrounding countryside, its flesh transformed into the stone blocks of an ancient ruin. Although the term sanctuary implies a place of shelter and comfort, in the ancient world, sacrifices occurred in the temple precinct at great open-air altars. The pear in Sanctuary Z takes the form of one of these ancient altars, where after ascending the grand stone staircase, the victim is incinerated. The open platform allows us to witness the sacrifice of a smaller pear: the great altar consumes one of its own kind. This is a clear reference to the Holocaust and to humanity’s willingness to sacrifice its own kind in times of war. In the lower left corner, another hesitant pear approaches the staircase about to meet the same fate. The billowing towers of smoke that rise from the flames serve as reminders of the great crematorium chimneys that the Germans used to incinerate their victims in the Holocaust.