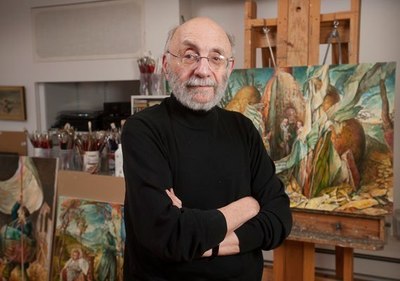 Samuel Bak was born in 1933 in Vilna, Poland, at a crucial moment in modern history. From 1940 to 1944, Vilna was under Soviet and then German occupation. Bak’s artistic talent was first recognized during an exhibition of his work in the Ghetto of Vilna when he was nine years old. While he and his mother survived, his father and four grandparents all perished at the hands of the Nazis. At the end of World War II, he fled with his mother to the Landsberg Displaced Persons Camp, where he enrolled in painting lessons. In 1948, they immigrated to the newly established state of Israel. He studied in Jerusalem and completed his mandatory service in the Israeli army. In 1956, he went to Paris to continue his education. He received a grant from the America-Israel Cultural Foundation to pursue his artistic studies. In 1959, he moved to Rome where his first exhibition of abstract paintings was met with considerable success.

Since 1959, the artist has had numerous exhibitions in major museums, galleries, and universities throughout Europe, Israel, and the United States, including retrospectives at Yad Vashem Museum in Jerusalem, and the South African Jewish Museum in Cape Town. He has lived and worked in Tel Aviv, Paris, Rome, New York, and Lausanne. In 1993, he settled in Massachusetts and became an American citizen. The exhibition, titled “WITNESS: The Art of Samuel Bak,” features seventy original Bak works that are on loan from the Pucker Gallery in Boston.

Next
Witness: The Art of Samuel Bak
HOME