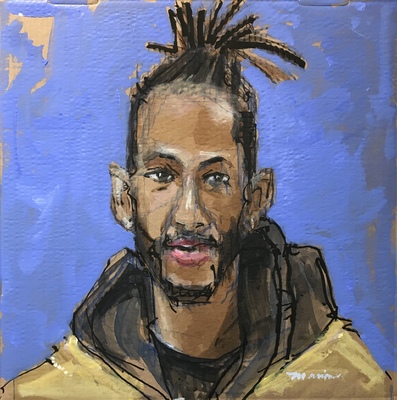 I have this vague recollection that when I started Dominic’s painting, I had the composition all wrong and then I started fresh again.  But when I started the second time, Dom’s painting pretty much painted itself.  Like the painting of Sean before him, Dominic brought all kinds of reference points which made it easy for me to lay out the foundation of his painting.

Here’s one thing I learned from painting Jen with my first painting.  Prior to starting this project, when I would paint a portrait on canvas or board, my style was to aggressively attack the canvas with paint and then maybe wipe some off.  But I realized in that first painting of Jen that applying so much water to the cardboard just wrecked the surface, so that when I subsequently painted Garette and Karin, I held back and tried to apply less water and paint.

I think with Dominic, I sought of hit my stride starting to paint with light washes and then coming in with some finishing colors.  I also remember he was wearing this great hoodie jacket that I wanted to get into the painting and I’m glad I did.